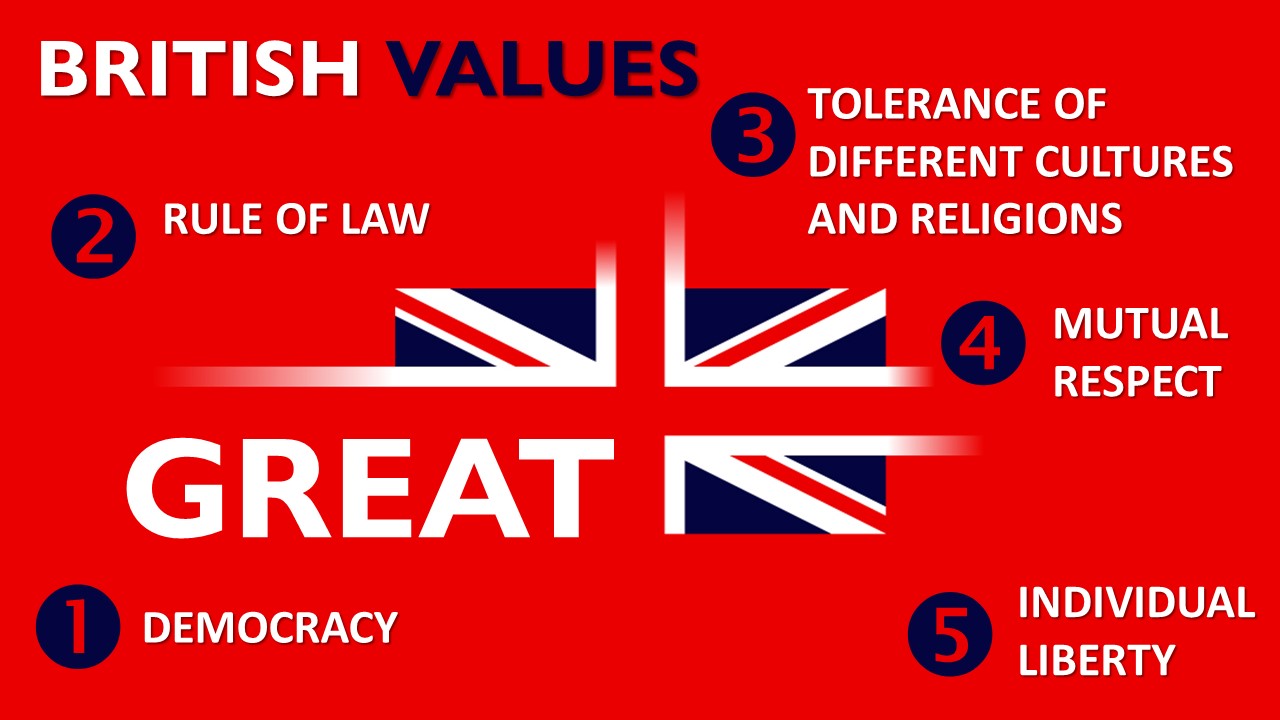 British Values are embedded through a wide range of subjects within our curriculum.  They are also explicitly referred to and explored in assemblies and form time activities.

The sections below give examples of how British Values are taught and promoted within our School.

Each Year Group attend a weekly assembly, based on the theme of that Sunday's Gospel.  The themes also relate to one of more British Values.  To view examples of assembly themes click on the links below.

Each year, school marks key national and international awareness days which relate to British Values.  These themes are explored in assemblies, form time and specific subjects. 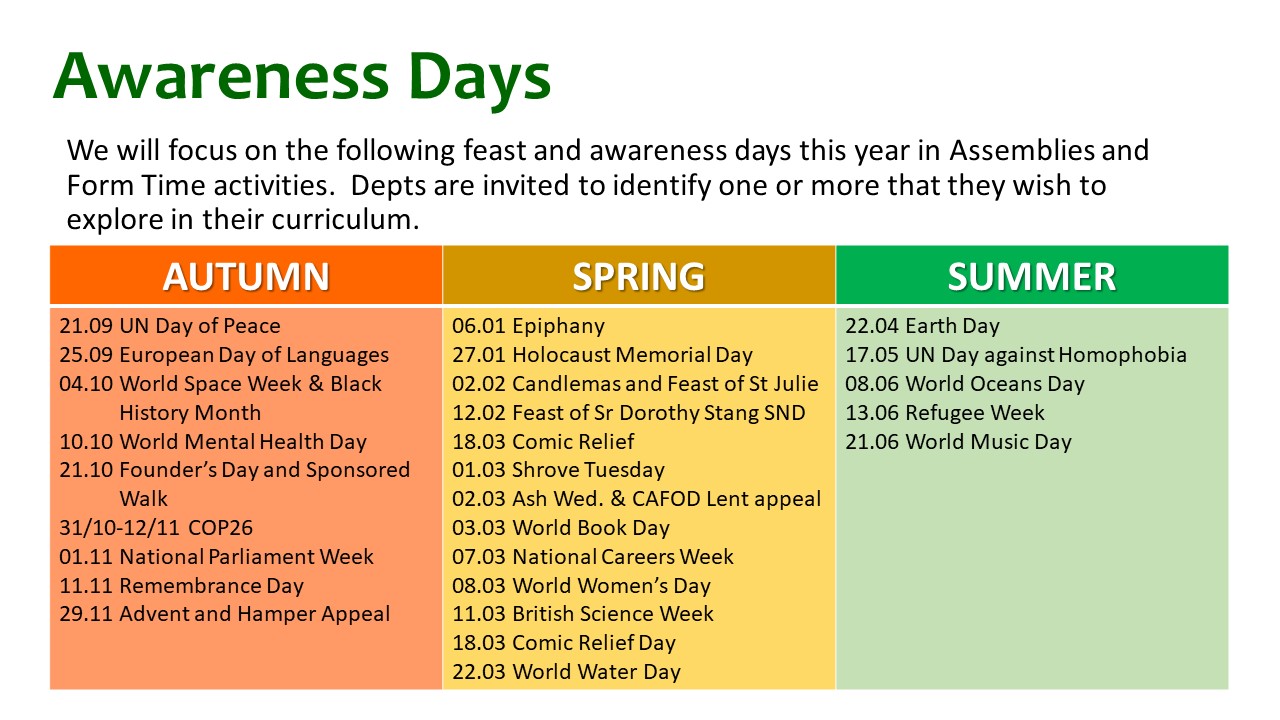 Our Head Students are democratically elected by the whole school community in July each year.

Our Head Student Team meet half termly to discuss their key aims and any issues raised by Year Councils.

Year Councils are made up of representatives from each year group. Students apply to become their year reps in Sept and are selected by the 6th Form Council.

The Council listens and responds to matters raised by students.  They are consulted on key decisions about whole school priorities.  They are also involved in the appointment of key staff roles.

A key role of the School Council is to identify the charities which we will support.  The chosen charities are required to prove how they promote values of mutual respect, diversity and inclusion.  They are also required to show how they prioritise the needs of the most vulnerable in society.

Students can also get involved in the Norwich Youth Advisory Board which gives young people a voice on local services and issues that concern them. 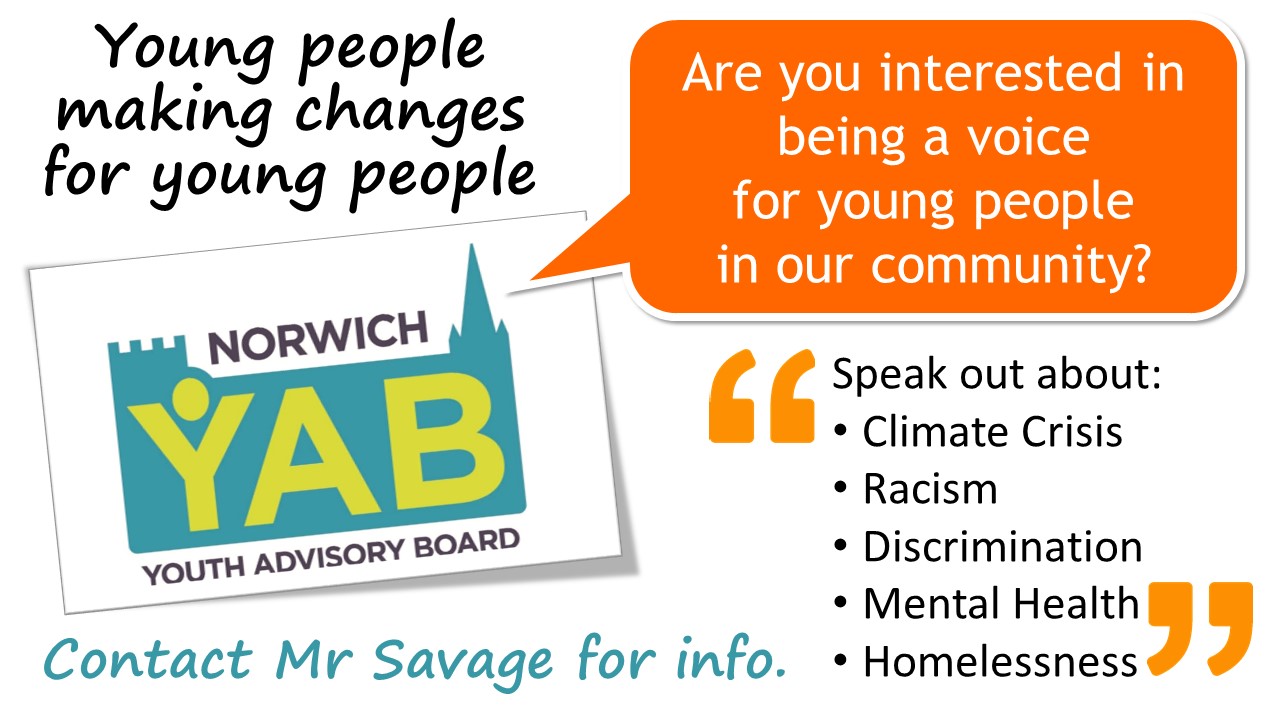 We run a wide range of clubs for different year groups that enable students to mix with other students from different backgrounds and age groups.  This helps to strengthen community cohesion.

A number of the clubs also give students opportunities to explore different cultures and/or global issues.

To view our current activities, click on Clubs & Activities

The discursive nature of studying English Language and Literature ensures that opportunities to promote British Values are found across our curriculum. As a core subject, we teach across all Key Stages and therefore have a major part to play in supporting the values in a whole-school context. Students of English are continually challenged to reflect on a range of complex issues, and they debate these in spaces which are calm and structured.

In Year 7 and Year 8, students are introduced to British Values within the foundations of English Language and Literature through a variety of texts and activities. We consider the morality of Ancient Greek myths and their influence on Western culture across time. Students are introduced to bespoke poetry and prose anthologies, both of which are diverse and representative of English-speaking cultures across the world. In our Multimodal Texts unit, students are engaged with reporting on political issues and are taught to examine how opinions are shaped and presented. Our set text, ‘How High the Moon’, deals sensitively with racism, colourism, poverty and same-sex relationships, and lessons are designed to provide a mututally respectful forum for discussion, modelled by class teachers. In Year 9, two-thirds of our curriculum focuses on social pressures and the goals of achieving liberty, democracy and the rule of law for all. The set texts here, as well as another bespoke anthology of protest writing, enable students to reflect on contemporary matters in an intersectional way, across disability, race, sexuality, climate change, gender, economics and immigration.

At GCSE, the texts are all British in origin, and here we build on the concepts first introduced at Key Stage 3. At A level, the selections from within both of our chosen specifications are there to ensure a multicultural representation of texts across time to ensure a plurality of viewpoints and so that students can also recognise and critique their own identities and behaviours in aspects of these, often using Socratic forms of debate. Above all, in all English teaching, there is a determination to go beyond ‘tolerance’ and instead strive for ‘celebration’ in every diverse and democratic classroom.

British Values can be found throughout our History curriculum at all key stages. We are very proud of this and our aim as to ensure that all students by the end of their Key Stage 3 experience have a clear understanding of what it means to live in modern day Britain and the values our society is built on.

Our work on Medieval England in Year 7 where we learn about Medieval England, including topics such as Magna Carta and the Provisions of Oxford, alongside our work in Year 8 on the English Civil War, the Glorious Revolution and the Voting Rights Acts of the 19th and 20th Century and our work in Year 9 and Year 11 on totalitarian regimes informs ours students of the meaning of democracy and how it developed over time in this country.

Our students understanding of the rule of law, is influenced initially through their understanding of Magna Carta and developed further through their study of abolitionist movement of the late 18th and early 19th century in Year 8. Personal Freedom also stems from this topic, but at the same time is enhanced further through students studying the Black Death in Year 7 and how it broke down the feudal system, alongside the freedoms brought to middle and working class men of the 19th Century and women in the 20th Century through political reform.

Individual liberty, mutual respect and tolerance of those with different faiths and beliefs, is very much linked to our work at the end of Year 9 on Post-war migration to this country and Civil Rights. At the same time, students understanding of these three key British values is enhanced further when studying areas of History where sadly people did not have individual liberty, mutual respect or a tolerance of those with different faiths and beliefs, be it from the Crusades in Year 7 to life in Nazi Germany in Year 9 and Year 11.

Our students are encouraged to express their individuality, whilst also respecting our British Values of acceptance and tolerance of others.

These values are promoted and explored across the PSHEE Curriculum.  Lessons that explore specific British Values display our British Values graphic to draw explicit reference.

To see some example PSHEE that cover British Values, click on the links below:

To see how British Values are explored throughout the KS3-4 PSHEE Curriculum click on one of the rationales below:

Religious Studies is delivered to all key stages and makes a major contribution to the whole school promotion of British values. RS lessons offer a structured and safe space for reflection, discussion, dialogue, and debate. Students learn to think for themselves about British values and develop the skills and attitudes that help them live as committed British citizens. RS classrooms are democratic spaces where all students have an equal right to be heard and where democracy and mutual respect is modelled by the teachers and an expectation of every student.

Throughout all key stages in Religious Studies, students examine religions and their different laws, considering their moral nature and relevance for modern day living. In Years 7 and 8 students study Biblical Law, most prominently with Moses and the Torah and the New Law of Christ’s Covenant in the New Testament. In gaining insight into the importance of structural laws, students differentiate between religious and secular laws and apply their learning to today’s British legal system, understanding its democratic formation with balance between individual liberty and the greater good. In Year 9, through the topic of Religion and Morality, students investigate deeper aspects of law and how it has developed throughout history to ensure equity and fairness. Personal analysis and evaluation are given to a variety of moral issues i.e. same-sex marriage, with reflection on where British law stands and why. GCSE RS also covers religious and secular laws, with open forum to discuss why laws exists and the significance of democracy in formulation. Sixth Form Culture and Faith Studies (CFS) covers topics including UK Parliament, enabling students to understand the process of democracy and how this is inextricably linked to political reform and passing of UK Laws.

Individual liberty, mutual respect, and tolerance of those with different faiths and beliefs is interwoven into the Religious Studies curriculum and forms the basis of every RE lesson. All key stages study the causes and effects of prejudice and discrimination. Racism is covered within the curriculum, with all year groups learning about prejudice and discrimination shown towards people from Black and Dual-heritage backgrounds. Students explore the history of racism, including Britain’s role, and how to learn from past mistakes and  recognise racism within today’s society and their own personal and social environments. In identifying the various forms of racism, from microaggressions to macroaggressions, students are equipped with the educational and empathetic tools to challenge and stand against it, recognising its divisive impact on Britain as a multiracial society. As an awarded School of Sanctuary, RE is committed to educating students on the plight of refugees, with each year allocated curriculum time to examine the grave impact of subjugation. From this, students develop empathy and self-awareness of their own freedoms, rights and responsibilities as British citizens. In years 8, 9, GCSE and sixth form CFS, anti-Semitism is covered in the study of Judaism and the history of Jewish persecution, including current anti-Semitism in British and worldwide affairs. In studying Islam in Year 9, Islamic societal stereotypes are identified and in exploring the Five Pillars of Islam, students recognise and respect the true essence of Islam as a religion of peace.

RE teaching and learning goes beyond ‘tolerance’ and engenders a deep respect and appreciation for the enrichment gained through the historic and continued contributions of ethnic minority groups and world faiths in Britain. In learning about ethnic diversity and world faiths and practices, students engage with Britain as a multicultural and multifaith society and understand the importance of religious freedom, community cohesion and mutual respect. They are challenged to actively promote British values beyond the classroom and to be instrumental in providing a safe and harmonious society for all British citizens.

We are proud that British Values can be found throughout the Geography curriculum at all key stages. Our aim as to ensure that all students have an understanding and appreciation of what it means to live in modern day Britain along with a grasp of the values that our society is built upon.

Geography is a contemporary subject and geographical issues are regularly in the spotlight. We endeavour to use these examples and current issues to support students in their understanding of both their roles in modern Britain and the wider world.

Topics such as Development and Aid (Y8) and Migration (Y9) look at issues relating to inequality along with successful and unsuccessful approaches to solving these issues. Furthermore, climate change within the KS3 and KS4 curriculum facilitates reflection about a range of ethical issues linked to our own lifestyle and the choices that we make. Our responsibility to the planet and the struggle of many poor communities to cope with what the more developed parts of the world have brought upon them.

The geography curriculum provides opportunities for students learn about the range of positive impacts that diversity and multiculturalism in modern Britain has created. However; there is also significant consideration given to the issues created by both inequality and deprivation within the UK. Students also reflect on the effectiveness of strategies used to address these major issues.

There are a number of elements within the curriculum in geography which link to the EU, Colonialism and Neo-colonialism as well as International relations. We take a very sensitive and compassionate approach to the delivery of some of these issues, and in doing so we enable students to appreciate a number of political systems along with their respective merits and issues.